Themes of Research at CERMAV 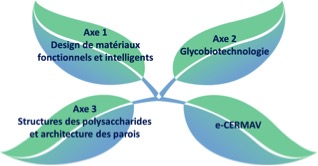 CERMAV's scientific themes encompass different areas of glycoscience, ranging from human health and plant biology to materials science and glycochemistry. Sugars are present in all living organisms, plants, bacteria, algae, mammals. Their location as the cell surface provides them with a unique range of signaling and mediations roles that contribute many biological functions. Other features underline the expression of properties structuring, texturing … agents which make these biosourced raw materials very promising from the (bio)-technological standpoint. Research at CERMAV is performed by five research groups, each of them being highly specialized in a given discipline. In complement, major themes are developed in the context of transverse axis encapsulating the contribution and discovery emanating from the research groups.

Glycans represent a source of raw material that can be modified, to bring novel properties. This may be achieved throughout proper functionalization and by the coupling of oligo- and polysaccharides. The emergence of self-assembled molecular systems corresponds to the conjunction of chemistry, condensed matter physics and molecular biology. The goal is not only to control the molecular and macromolecular architecture of oligo- and polysaccharide-based systems, but also to build, or mimic them at the nano- and mesoscopic scales. Such constructions are glyco-nano-objects, nanoparticles, nanocrystals, films and surfaces which are given specific functions and properties.

Glycans represent a source of raw material that can be modified, to bring novel properties. This may be achieved throughout proper functionalization and by the coupling of oligo- and polysaccharides. The emergence of self-assembled molecular systems corresponds to the conjunction of chemistry, condensed matter physics and molecular biology. The goal is not only to control the molecular and macromolecular architecture of oligo- and polysaccharide-based systems, but also to build, or mimic them at the nano- and mesoscopic scales. Such constructions are glyco-nano-objects, nanoparticles, nanocrystals, films and surfaces which are given specific functions and properties.

Carbohydrates, in the form of oligosaccharides and glycoconjugates, are involved in a large number of biological functions and pathological processes. The production of oligosaccharides by organic and enzymatic synthesis, or by fermentation of genetically modified microorganisms, offers new perspectives in the preparation of vaccines, therapeutic molecules (drugs, vectors of active principles, etc.) and diagnostic tools ( molecules for imaging and for the dosing of specific activities, sugar chips, etc.).The enzymes involved in the biosynthesis (the glycosyltransferases) and the degradation of oligo- and polysaccharides, (the glycosyltransferases) are considered as tools allowing the synthesis of oligosaccharides which are carrying several properties of biological relevance. For example, the molecules of interest are those involved in chronic and infectious diseases. The recognition of oligosaccharides by specific receptors, lectins, is a crucial step for bacterial and viral infections and the spread of metastases.The identification and characterization of new enzymes is a preliminary step that can be complement by (glyco) synthetic biology for the production of even more innovative biotechnology tools.

The plant walls provide major biological functions defining the singularity of plants. One theme of research is dedicated towards the study of the biosynthesis of cell-wall polysaccharides. This is to understand the relationship existing between biosynthetic events and the development of plants. Another line of research aims at establishing the contribution of different polysaccharides to the properties of plant walls. For this, we use a functional genomic approach to identify and characterize the genes encoding plant glycosyltransferases. The second theme focuses on the complex organizations of these polysaccharides and aims to study the structure and organization of the main biopolymers within the native or reconstructed plant walls. A particular focus is oriented to the exploration of modes of assembly of cellulose chains in native fibers and to study how these fibers associate with hemicelluloses. These research are of fundamental and practical importance as regard to the plant cell wall. Nevertheless, a major obstacle remains our still-limited knowledge of the biosynthesis events.The plant walls are extremely complex nanocomposites of cellulose, hemicelluloses and lignins. The particular organization of these polymers gives the plant walls their singular properties such as mechanical strength, high expansion capacity (anisotropic) and resistance to high turgor pressures. They are also at the origin of multiple applications as agro-alimentary resources, source of renewable biomass for biomaterials and source of energy.

This particular theme is dedicated to the development of in-house computational resources and chemo and bio-informatics. Particular emphasis is given to scientific communication and dissemination to the general public in the form of electronic chapters and databases.

One of the major current challenges in polymer science is the design of new materials from renewable natural resources derived from biomass. Cellulose, for example, is the most abundant natural polymer on earth (its production by plants is estimated at 50 to 100 billion tonnes per year) and is an endless source of raw material. Its derivatives are used in many industries: food, cosmetics, textiles or packaging. These materials are intended to replace toxic or non-biodegradable products derived from fossil resources, while offering equivalent properties (mechanical, thermal, optical, etc.). Biopolymers, and more particularly polysaccharides, have therefore emerged as very attractive natural components of these materials of the future.

The other fields of glycosciences are important areas of innovation as well, and Cermav has been able to both develop processes for the manufacture of biologically active oligosaccharides and polysaccharides and to join forces with companies that have developed applications in the field of agronomy and health.

On this very productive area, some companies have been created from the research work of CNRS researchers in the laboratory: Elicityl (in the field of biologically active sugars), BT3 Technologies and Funcell in that of biobased materials.